Our next counter visit was in Ft. Wayne, Indiana. No, we didn't drive 3 hours just to eat here -- we were in town for the annual GearFest at Sweetwater Sound.  After enjoying the festivities for a day (and picking up some really good open-box deals), we decided to find a local counter before heading back home. Klemm's came highly recommended and it did not disappoint!

Located in one of the older neighborhoods on the North side of Ft. Wayne, Klemm's is apparently a local favorite that's been there for over 20 years. In a small building with no front door (you go in through the side), it clearly is popular -- full parking lot and every table (there are only 10 or so) full.  Fortunately, it has a fairly large counter and were able to grab two seats right away.  While we were there, more and more people came in until there as a large group waiting.

The service and the food proved the crowd right -- super friendly and incredibly efficient staff, and a great meal all around.  Klemm's far and away set the record for speed -- we had our food on the counter in about 3 minutes from the time we placed our order. Given how busy they were, that was really impressive!

And the food quality was great too.  Breakfast sandwich (on a croissant) and potatoes for Cam, and eggs / bacon / potatoes combo for Ted.  Everything cooked really well and with great coffee too.  Overall, one of the top counters of all we've visited.  If you are ever in Ft. Wayne, go here! 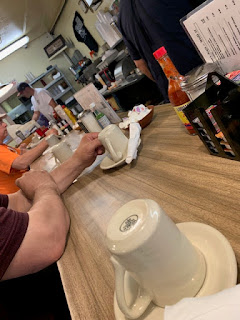 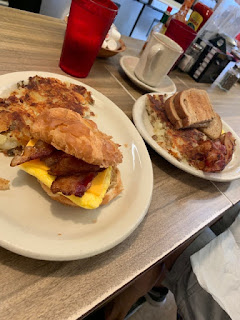 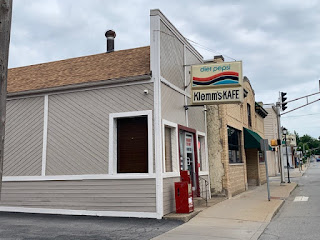 Cam says: "Atmosphere could be called 'interesting', but with decent service and good food quality I'm giving it 7 frying pans."

Ted says: "Everything about this place was great -- old diner atmosphere, lots of local color, excellent service and great food. Nothing is perfect, but Klemm's is pretty close. 9 pans."

s
Posted by Eat At The Counter at 5:07 PM No comments:

We needed to make a trip out to Willowick on a Saturday, and had limited East side counters remaining on our list -- hoping to go somewhere in the vicinity.  In a random desperate search on Google maps, we turned up the Chagrin River Diner, in old downtown Willoughby.  Apparently it's a fairly new place, since we've been to other counters nearby in prior years and hadn't noticed it.

Located on Erie St dead in the center of the downtown, the diner is maybe one of the most modern we've visited. It looks like it took over the space of an existing restaurant -- lots of modern booths and a big open kitchen on one side. They installed bench-like seating fronting the very long counter all across the open kitchen area -- really nice to see and interact with the staff as they were working.

The menu is also pretty modern -- a bit more upscale than your typical diner, including items like chorizo, carnitas, steelhead, breakfast tacos and avocado toast.  But you can also build your own more standard breakfast, putting together eggs, various meats and several types of potatoes.

Cam got scrambled eggs, bacon and breakfast potatoes -- good, but too many veggies in the potatoes for his liking.  Ted went with the chorizo hash and over-medium eggs -- an unusual choice, but really good -- spicy and a very large potion.

While it's billed as a "diner", this place is definitely much more. In a great location and with a pretty cool, modern layout and style, it makes a good contrast to the more traditional counters we usually see. 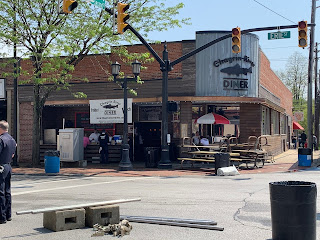 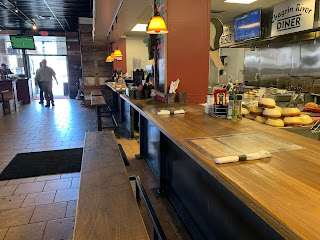 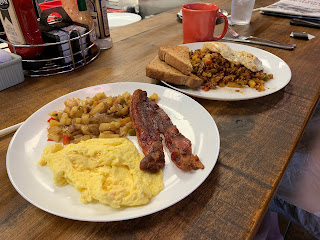 Cam says: "Food for the most part wasn't a hit.  Service was nothing more than decent.  But, the atmosphere of the restaurant and staff made it better. I'll give it 6 frying pans."

Ted says: "Pretty cool place -- loved the layout of the counter all along the kitchen -- unusual and excellent choices for breakfast. A strong 8 pans."

Making our way out to the West side on a Sunday morning, we dropped in at Goody's in Brook Park, on Snow Rd not far from the airport.  This place is really popular, and the large parking lot was pretty full -- probably near peak time for the post-church crowd on a Sunday.
The good news is, they have a very large counter -- and with most people being there in larger groups, waiting for tables, we had no trouble getting seats.

Goody's seems very efficient -- clean, pretty quick and well-organized.  Even the staff all wear matching shirts, and seem to work together really well.  I think we had 3 different servers paying attention to us at the counter, whether it was taking our order, bringing more drinks or delivering the food -- all seamless.

They have an extensive menu (beyond just breakfast -- they seem to do a great lunch business too). We both had potatoes and eggs, and Cam added bacon. All around, the found was great -- fresh, hot and another one of the few places that can get the potatoes right. Crispy on the outside, light on the inside, and not greasy at all.  Coffee was solid too.

This one is a keeper -- we would definitely go back when in the area -- quality and overall experience make it well worth a visit to Goody's. 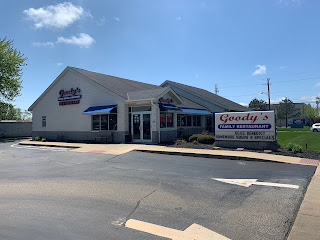 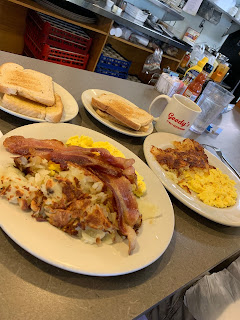 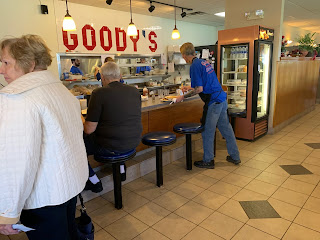 Ted says: "Really liked this place a lot -- spacious counter, attentive staff, busy but not chaotic, and the food quality was excellent. 9 pans!"

s
Posted by Eat At The Counter at 7:43 AM No comments: